SSO to Netscaler hosted web services for internal users:
A request we receive from time to time from our Netscaler customers is that they would prefer internal users (users connected to the company’s LAN/Wifi or through VPN) to automatically get SSO when they browse to a load balanced web system (https://sharepoint.mycompany.com). One way of doing this is to simply not configure any Authentication on the LB vServer (don’t specify any AAA vServer nor any Authentication Profile), and let the backend web server handle the SSO. If the user has added https://sharepoint.mycompany.com to Local Intranet Sites or Trused Sites through Internet Explorer (or through GPO) on their local computer, and the backend web server supports either NTLM or Kerberos, then that should work fine.
Another way to achieve SSO is to configure Kerberos authentication on Netscaler (on a Authentication vServer specifically) and then have the Netscaler handle the SSO to the backend through a Traffic Policy. In 9/10 cases you can go with the first method and let the backend server handle the SSO (through Local Intranet Sites configuration), but there is at least one scenario where is isn’t possible, and that’s when the Netscaler has a SAML federation to a 3rd party and the Netscaler is acting as the Identity Provider (IDP).
When the Netscaler acts as a SAML IDP, there is no real backend server that can handle the SSO part. Instead it is the Netscaler that requires the user’s credentials so it can pass them on to the 3rd party Service Provider (SP) in a SAML ticket, and one of the few authentication methods on Netscaler that doesn’t require active input (prompt) from the user is Kerberos authentication. But even with Kerberos authentication configured, the only thing the Netscaler can extract during the authentication process is sAMAccountName, and it could be that the 3rd party Service Provider requires that the SAML IDP sends the user’s Email Address or UPN, for example. So to fully cover that scenario you need to (in addition to Kerberos) also configure LDAP Attribute/Group Extraction on Netscaler to allow Netscaler to extract AD attributes of the user’s AD account (and store them in Netscaler temporarily for later use) during authentication.
Below I will go through the AD, DNS and Netscaler  configuration needed to configure Kerberos Authentication + LDAP Group/Attribute Extraction, and hopefully this will help someone trying to achieve Kerberos auth. In the scenario below the Netscaler acts as IDP in a SAML federation with a 3rd party SP, and the SP expects the user’s email address (on the user’s AD account) to be sent as part of the SAML authentication.

Traffic flow when everything is in place:
I’m putting the traffic flow here at the beginning, since it might help you understand why certain configurations are needed (and if something isn’t working, where it might be wrong).
Let’s say we have a user with the account name ’rakdev\testuser1’, and the user is sitting on his domain-joined corporate laptop, the laptop is connected to the corporate wifi and the user has logged to her laptop with her account ’rakdev\testuser1’. The process flow looks like the following: 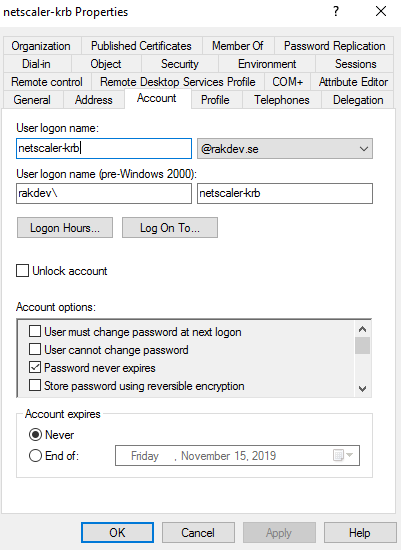 When you have created the AD service account, you need to run below command on a domain joined computer and you (almost) need Domain Admin privileges to run the command. This will create a Service Principal Name (SPN) record tied to this service account, and the SPN will be used during Kerberos authentication by the user’s computer and web browser.

When aboveis done, run below command to list all SPN records tied to account ”rakdev\netscaler-krb” and you should see the ”HTTP\aaa.rakdev.se” entry:

You can also see any SPN values tied to an account through dsa.msc: 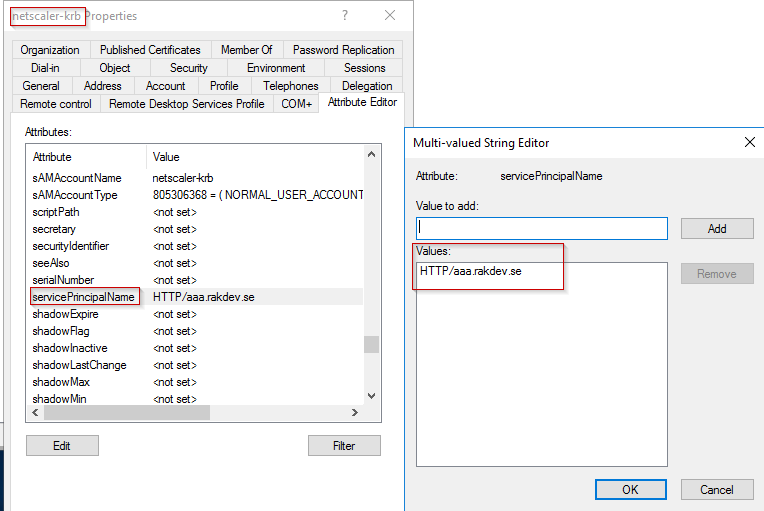 Configuring DNS for Netscaler AAA and Kerberos:
Now it gets a little bit complicated. Most likely you have a DNS record for the  FQDN of your AAA authentication vServer on Netscaler. In my case, the FQDN is ’aaa.rakdev.com’. If we were to create a normal DNS record (of type ’A’) in our environment for ’aaa.rakdev.com’ and pointing it to the IP of our Authentication vServer (10.82.22.123), then the user’s web browser would attempt to talk to the Key Distribution Center (KDC) in the AD domain ’rakdev.com’, which it wouldn’t be able to reach.
With a CNAME DNS pointing aaa.rakdev.com to aaa.rakdev.se however, the user’s web browser would instead attempt to talk to the KDC in domain ’rakdev.se’ (because CNAME is magical) and request a Kerberos ticket for ’aaa.rakdev.se’. And should succeed, since the user’s computer should be able reach the KDC server in ’rakdev.se’ over the internal corporate network.

’A’ type DNS entry for aaa.rakdev.se:

Netscaler configuration:
So let’s start with creating the AAA vServer. Nothing special here.

Kerberos:
The Kerberos configuration on Netscaler is probably new to most Netscaler administrators, however. For normal Kerberos auth, such as now, the value for the parameter ’-domain’ in negotiateAction can be anything, because it isn’t used actually. The value is mandatory in Netscaler however, hence we put ’dummy’ here. The parameter ’-domainUser’ should be the SPN value (without the ’http\’ part) we created earlier and tied to the AD service account ’netscaler-krb’.

LDAP:
The LDAP configuration for extracting AD attributes and group membership of the end-user looks like below. The things to take note here are

SAML:
The SAML configuration on Netscaler looks like below. I won’t expand on how to configure SAML on Netscaler since this post would become too extensive, but note the ”HTTP.REQ.USER.ATTRIBUTE(X)” expression to populate the SAML ticket with values that Netscaler extracted earlier during the LDAP lookup.

nFactor:
And now, the final part, which is nFactor. nFactor is a ’new’ authentication flow on Netscaler that Citrix introduced a few years ago. Basically it allows you to chain different types of authentications one after another. For example, for 2 factor authentication you could create an nFactor policy to first perform LDAP authentication, and then perform SMS (Radius) authentication in the next step. nFactor allows us Netscaler administrators to make it more granular, such as specifying that if a user is a member of AD group ”Skip-SMS-auth”, then only the LDAP authentication of the nFactor policy will be necessary. In our case, we will use a nFactor chain with Kerberos as 1st authentication policy and the LDAP lookup as 2nd ’authentication’.
Using nFactor is actually mandatory when configuring Kerberos + LDAP group extraction because of a technical aspect. Netscaler will extract the username specified in the Kerberos ticket delivered by the user’s web browser, and the username in the Kerberos ticket will be of format ’samAccountName@[domainTheUserBelongsTo]’. In our case, it would be ’testuser1@rakdev.se’. The Netscaler would then need to perform a lookup in AD for a user with a UPN value of ’testuser1@rakdev.se’, but this assumes that the UPN suffix of ’testuser1’ is ’@rakdev.se’. It could very well be that the user has a different UPN suffix, and hence the LDAP lookup would fail.
With nFactor, we can tell Netscaler to extract the string part before the ’@’ letter, which would be ’testuser1’, and perform an AD lookup for a user with the sAMAccountName of ’testuser1’ instead, and this should always work. This is what makes nFactor mandatory in our case.

I don’t have room to elaborate too much on how nFactor works, but below are the things to note from the configuration:

Thanks so much for this great write-up. The custom lSchema really helped with a client who similar to what you described, had disjointed UPN from actual domain so using straight up userPrincipalName in the group extraction factor was not viable.

← Login statistics with Director and Excel