Posted in : NetScaler, Other By Rasmus Kindberg Translate with Google ⟶

Over the last couple of years of working with the Citrix Netscaler product I’ve been noting down Netscaler cmds that I’ve found useful in various scenarios. The list of cmds I have saved up is quite big now, and I figured it would be helpful for other Netscaler admins to know about some of these.

Show amount of RAM that Netscaler Integrated Caching is currently using:
When configuring Integrated Caching on Netscaler you usually specify a max amount of RAM available for caching, and then create ContentGroups that dynamically increase (although with a RAM MB cap set for each ContentGroup) their RAM usage as the amount of cached objects will increase (assuming you use dynamically sized ContentGroups). You can also run below command without the ’grep -i’ part to see other useful info regarding cache stats.

You can then run below cmd to list particular properties about one of the cached objects: 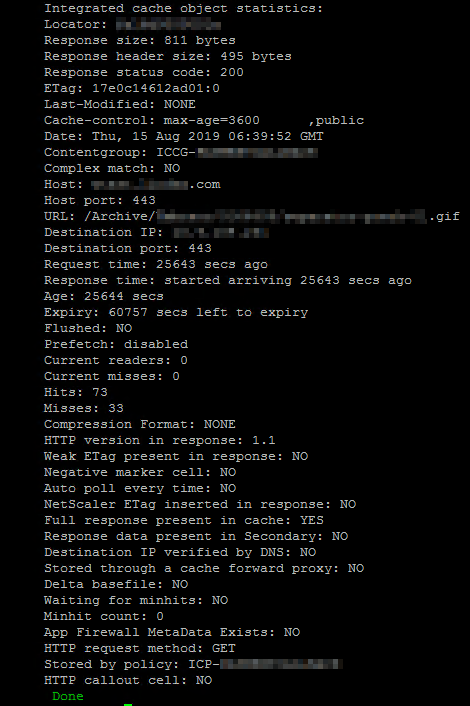 Run above and then perform an LDAP logon. You will then be able to see the LDAP authentication process logs in real-time, which includes info about any AD groups extracted from the user or the reason why LDAP authentication is failing for a particular user, among other things.

List all Netscaler Monitors that are currently marked as DOWN, and the reason why:

Check if there are any Netscaler HA packets that are not getting through to either Netscaler node:
Below command will list the latest HA packets received to this particular Netscaler node. The column ’delta’ is the one we’re interested in, and as we can see below we’re seeing a quite consistent value of ’70’ or around that for all HA packets. If we see one or a few lines with lower delta values (less than ’60’) then that might indicate a network issue between the two netscaler nodes. 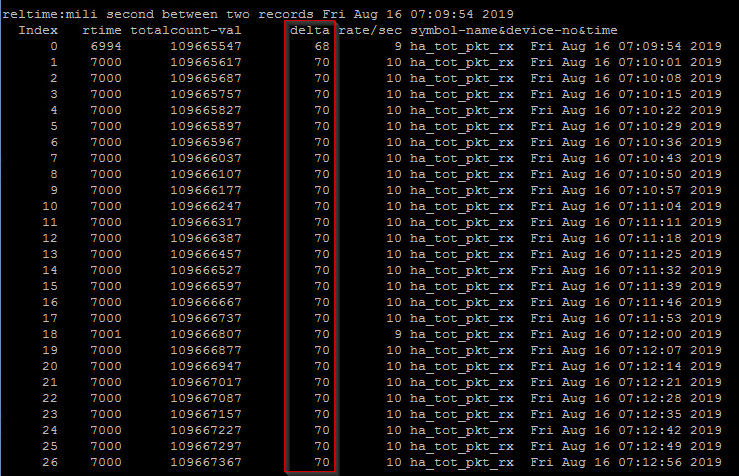 Show summarized network statistics for a specific LB vServer:
I mainly use this command to show the current ’Mbps’ value of traffic going through a particular LB vServer. A more user-friendly output of similar info (except for the mbps value) is ”stat lb vserver LB-SOMEAPP -full”

Check if there are any logged errors regarding memory (RAM) allocation:
There have been some Netscaler versions released that have contained memory leaks or RAM issues, and below command will show if there have been any RAM allocation failures (among other RAM errors). If there are no issues then you will get an empty output.

See total summary of RAM allocation to different Netscaler modules (and any potential memory errors):
Below can be useful if you see sudden spikes in RAM usage on a Netscaler, and you want to see what particular Netscaler module that caused/is causing it. You can then run below, take a screenshot and then run it again at a later time (when RAM usage% on Netscaler is differnet) and what module has changed its ram usage%. 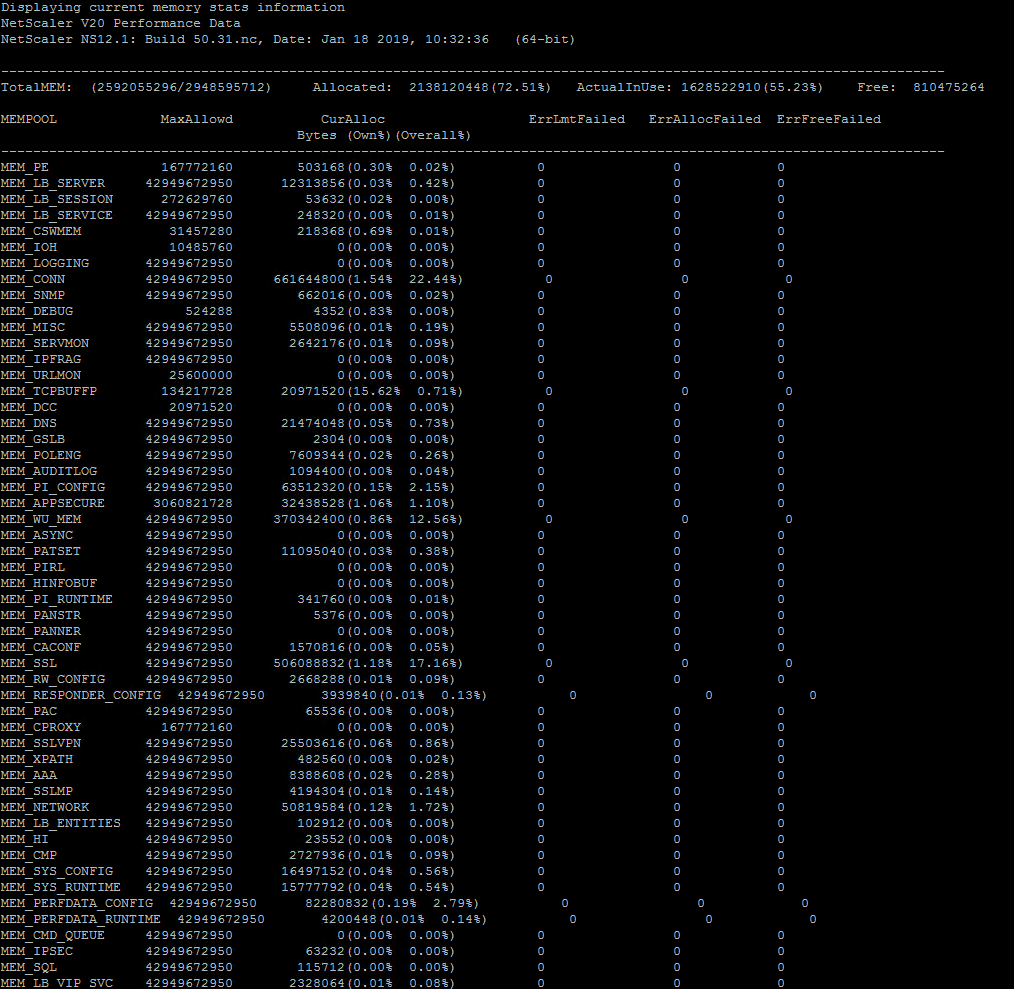 Read  Netscaler log file ns.log in real-time with filter:
Below can be useful if you’re troubleshooting a particular issue and want to see if Netscaler is logging anything relevant to ns.log while you perform user operation X. ’tail’ will print new entries in ns.log directly into your SSH window, and the ’grep -i’ will limit which messages you see. In below example I filter for any lines containing ’snmp’.

Check if Netscaler has detected any IP conflicts on a subnet used by Netscaler:
Below is useful if you notice network issues, you suspect there is an IP conflict on network (a random, unassociated backend-server has same IP as a LB vServer on Netscaler, for example) or if https://cis.citrix.com diagnostics is reporting an IP conflict. I don’t have an example of output, but if it is empty then there has been no detected conflict recently.

Reading old newnslog log files:
When you perform any ’nsconmsg -K newnslog’ command, it will only go through historical events for the last X hours/days (if your Netscaler is logging alot of data, then it’s probably a matter of hours instead of days of historical data). To check for events/issued in the past or for a particular date, you need to unzip old nsconmsg files and read from them instead. See https://support.citrix.com/article/CTX113341 on how to specify a specific time period within a newnslog file to look at.
Run below to unzip old files and check for particular events in these log files:


Utilizing https://cis.citrix.com to analyze Netscaler logs to automatically detect issues:
Below is useful if you do weekly/monthly/quarterly health checks on a Netscaler, since uploading Netscaler log files to https://cis.citrix.com will catch alot of issues (although not everything listed above in this blog post) and also give recommendations on configuration changes if something is not according to Citrix’s Best Practices.

Now you can proceed to download the .tar.gz file from Netscaler (using WinSCP for example) and manually upload it to https://cis.citrix.com. After upload it will take 5-15 minutes for Citrix’s analysis tool to go through the log files and generate list of recommendations and detected issues.

You can also run below command with ’-upload’ parameter to instruct Netscaler to automatically upload the log files to https://cis.citrix.com for analysis, so you don’t have to do that manually. The username/password you specify here are the credentials you use to logon to https://cis.citrix.com. You could possibly automate this process by having a script logon to Netscaler through SSH and run below command, but there doesn’t seem to be a way to automatically send reports or output from https://cis.training.com once the analysis is complete. Perhaps Citrix will add this functionality in the future. 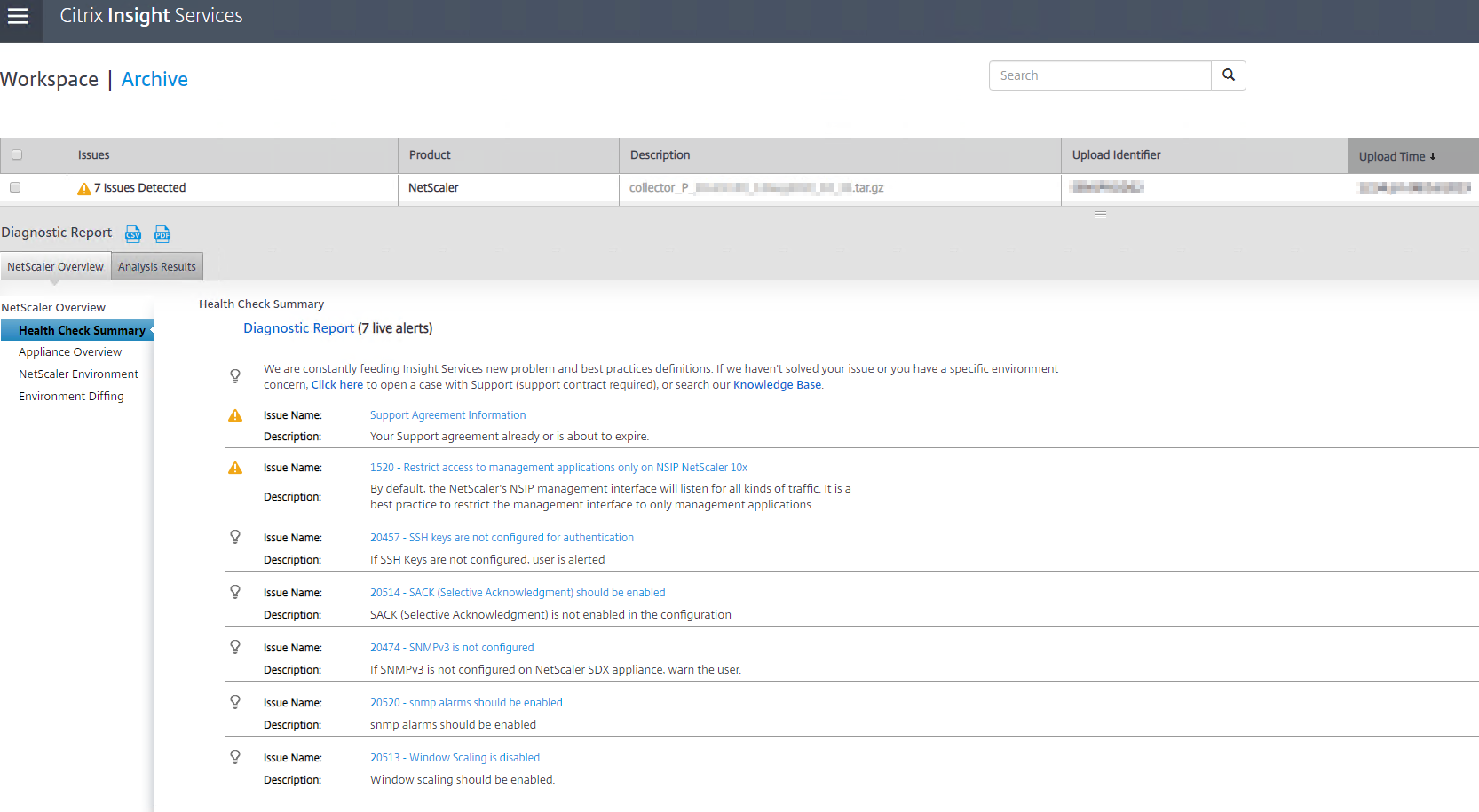 If you have any questions or input to above, feel free to either leave a comment here on the blog or email me at rasmus.kindberg@xenit.se.

Citrix ADC autoscale in AWS with terraform and Azure Pipelines →